Bill Thorness did not know much about solar energy at all when he first learned about Solarize Seattle from his friend who participated in the Solarize Seattle: Magnolia campaign. He says, “My friend, who was very fiscally aware is telling me that this program is a great idea, and so I thought it might turn out to be a good bargain.”  He went to a Solarize Northwest workshop and learned about the benefits and incentives of solar energy in Washington. He then received a free site assessment and decided to place solar panels on top of his home.

Bill now enjoys practically net zero on his electricity bill! He also looks forward to the yearly production incentive check that Washington state sends to residents who supply solar-generated electricity to the grid. “Solar wasn’t as prominent in the past as now,” he said. But now, “It’s an investment worth looking into.”

“The great thing about these solar panels is that they are silent. You don’t really need much maintenance and I love how durable it is.” 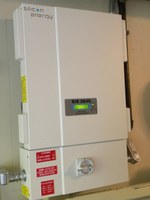 The financial investment was not Bill’s only motivation for going solar. “If we are ever going to get out of fossil fuel, solar is it,” he said. “It will be tougher and tougher for the next generation, and we need to start looking long-term.”

As a kid, Bill Thorness enjoyed reading science fiction stories about cities that power their whole system from solar energy. Now Bill owns a home that is 100% solar-powered.