When I walk into Bruce and Mary Davis’s home, the first thing they do is offer me cookies and tea. The second thing is tell me how long they’d wanted to go solar. According to Bruce, “For the last ten or fifteen years, we’ve watched solar power, but as with all these new technologies, what wasn’t clear was whether there’d be generational improvements….We’d looked at it a couple times, but it was always really expensive.”

The Solarize model, with its discounted rates, helped give them that final push they needed. When they attended one of the free workshops in their neighborhood, Mary says, “Everything they said was exactly what we wanted to know,” from the clear explanation of tradeoffs between different solar system options to the financial analysis showing total costs and projected payoff time. 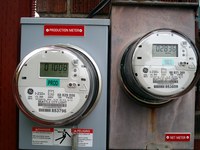 Equipped with all this knowledge, they went ahead and withdrew some of their retirement savings to sign a contract for a 3.8 kilowatt system with micro-inverters, which help minimize the power lost from the morning and evening shade they get from the beautiful trees surrounding their home. 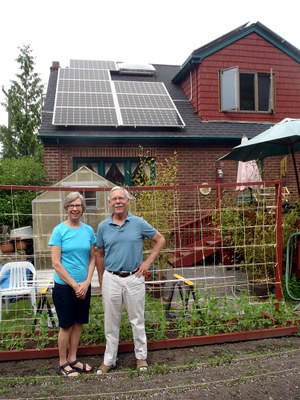 Braving the worst of Seattle January, the contractor set up Bruce and Mary’s system and fixed an early equipment issue in under a week. As you might expect, they got cookies and tea as well, and Mary compliments their communication skills, saying, “They explained everything they did every day.”

“We’re big recyclers, we grow a lot of our own food in the garden, we drive hybrids,” Bruce says, but being able to see the source of their electricity, “helps me be aware of how much energy we’re using.” That awareness, and their commitment to efficiency, mean that they’re already having net-zero energy bills some days. With that kind of payoff, it’s not hard to understand why, in their words, “We recommend it to everyone we know.”