Jackson Place Cohousing isn’t the first place you’d expect to see a solar power success story. The obstacles to putting solar on a multi-family development can appear insurmountable, at least at first. But that wasn’t going to stop the members of the Jackson Place Solar Team: Liz, Barb, Heidi, Clara, and Molly. After all, it was a long time coming, says Heidi, “There were a few other times people got interested in solar and went to meetings, did some research,” but it had never panned out.

But when the Solarize Seattle: Central/Southeast campaign began in their neighborhood, offering discounted prices and education on solar power, they figured now was the time to act. However, they’d have to get all 27 households on board, since the Jackson Place Cohousing community makes all their decisions on a consensus model. If it wouldn’t benefit the entire community, they wouldn’t go ahead with it.

The Solar Team had some advantages in making the case though. Liz and Clara both attended one of the free Solarize workshops, and Liz cites the clear explanation of the “nuts and bolts of how solar actually works” as one of the keys to the success of presenting the project to the whole community and beginning the consensus-building process. Also, the community-selected contractor serving the campaign “had a lot to do with it,” says Barb. “They would answer any question we had.” Having a known, reliable solar installer chosen by your neighbors is one of the biggest advantages of Solarize.

Even with the help of Solarize, they had to do a lot of work to make solar work for their community. We asked them what the biggest lessons were for other groups pursuing solar in multi-family housing. 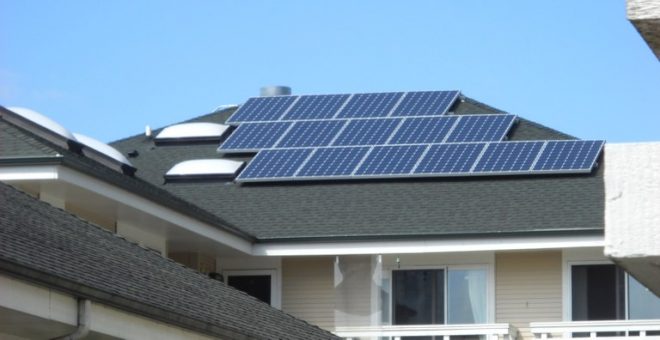 Jackson Place had the advantage of being a sustainability-minded community to begin with, but the Solar Team still had to spend a lot of time talking to their fellow cohousing members outside of formal meetings. This let them not only get a baseline sense of how people felt about the idea, but also address concerns before they had to put proposals to a final vote. Those concerns ranged from potential damage to the roof and waiting until the roof was due for replacement to the chance the system might impede firefighters.

2. Consider a variety of payment or financing options

Figuring out how to equitably spread the costs among cohousing members was critical, given the mix of income levels in Jackson Place. The community ultimately chose to pay for half of the system with an internal loan from their Reserves account, and the other half was loaned by a generous member. Heidi put a lot of work into analyzing different options to pay back the money, which she presented and explained at community meetings. The 30% federal tax credit, split up among the members, will be returned to the community, and will be used along with Washington State production incentive payments to pay back their reserve fund first and then their private donor. In the meantime, all members will benefit from the reduced electric utility bill at the common house where the solar array was installed. 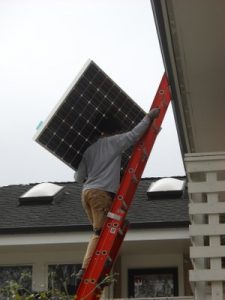 3. Think about the logistics

One of the advantages of going solar as a whole group is that you can pool your resources for a larger system. However, that also means the installation is going to take a bit longer and has the potential to be more disruptive. When it came time for the actual installation, there were a few issues that had to be taken care of. One member had to move out of their parking spot for the duration of the installation. Concerns about security meant the contractors working on the electrical system in the garage had to keep the door closed as much as possible and keep a sharp eye out, with some help from the community. The installers managed to avoid having to enter anyone’s unit to run conduits, but in many cases they might, which means having to work around schedules and pets.
Learning those lessons means that today, with a projected annual production of 9600 kilowatt-hours, the Jackson Place solar array will cover a third of the common house’s electricity bill. That’s a big dent, and a testament to the electrifying power of a community committed to sustainability.