In her previous career, Suzanne Skone—now owner of the Mercer Island Auto Spa—was a mechanical engineer helping build fossil-fueled power plants. That background gave her a good understanding of the benefits of installing solar on her new business, which became host to the 500th solar system installed through Solarize Washington in August 2014.

“Our mission statement is to be socially and environmentally conscious,” Suzanne says, standing beside the prominent Puget Sound Starts Here poster at the front desk. “We collect all the sludge and oil that comes off the cars.” Going solar was a natural progression, not just for the business but for Suzanne personally. “The carbon reduction is important to me. I like to travel, so I wanted to offset some of those emissions.” 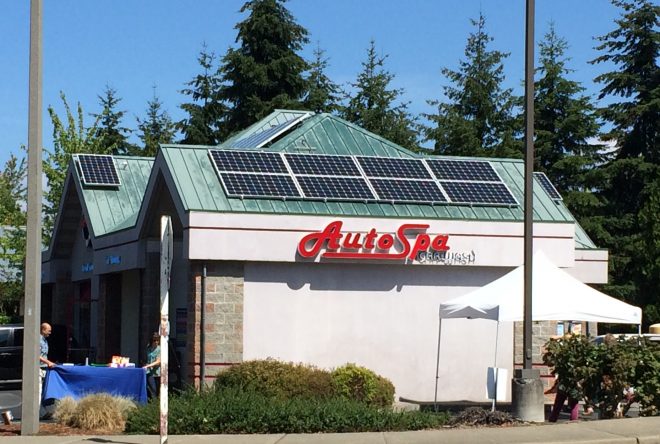 That environmental commitment isn’t just for Suzanne though. It’s also a way to support the community. As Suzanne puts it, “Not everyone can make the leap to purchase a solar system, but folks could participate in solar energy by choosing to wash their car here.” She tells the story of the Puget Sound Energy employee who, after installing the production meter to measure how many kilowatt-hours the new solar array will produce, took his car through the auto-wash and came out with the sudden realization, “I just washed my car with solar energy.”

With that kind of motivation, one of the free public workshops that are the core of every Solarize program provided the information she needed to put down the cash for her system. “I didn’t have to start from scratch. A lot of the work was done for me.” Having all the information and experts in one place, and the contractors pre-selected by local community members, is how Solarize accomplishes its goal of cutting the costs—in cash and effort—of choosing to go solar.

Once she had her site assessment and decided to go ahead with it, “The installation was seamless. We didn’t have to shut down at all,” for the 4 days it took to complete. Now that it’s operational, Suzanne estimates that one out of every ten washes is powered by the sun, and she’s considering installing LED lighting to make it even more efficient. Her only complaint: “I just wish it had been done sooner.”