When Stephen Dooley and Bob Santucci saw the flyer for Solarize Seattle, they thought it might be a good idea. “We didn’t have tons of tree cover, so we figured our house was a good site,” except that, Stephen says, “It seemed from the flyer that it was too good to be true.”

To find out for sure, they decided to listen in on one of the free Solarize Seattle webinars. What they heard convinced them that going solar was worth it, and they signed up for a free site assessment from Puget Sound Solar, one of the community-selected solar contractors taking part in the campaign.

Even though a shortage of panels made the installation take a little longer than they expected, Stephen and Bob were happy with the experience. They even got some extra opportunities to upgrade their home. “They used the same electrician they always use, and they were able to do some other upgrades, like the lights,” mentions Stephen, referring to the new energy-efficient LED bulbs in their living room.

It’s not just the lights that are saving them money either. They’re looking forward to their first annual Washington State production incentive check, which pays for every kilowatt-hour they produce, and they’ve installed a new heat pump too.”We’re trying to make the chunk where we’re making more than we’re using bigger,” says Bob, who’s a big fan of the E-Gauge that measures their power production and use. “I have it on my phone, I have it on my iPad.”

Their neighbors are interested too. “People are stopping all the time to look,” according to Stephen. Making sustainable energy accessible to every
one is the whole point of Solarize, so Stephen and Bob’s system looks to be the start of a great thing. 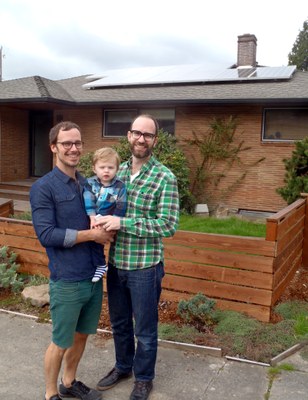